COVID 19 has impacted the way we’ve worked and lived our lives these last 12 months, that’s for sure. We’ve been forced to stay at home longer and figure out ways to entertain ourselves in isolation.

Anecdotally, it seems to have affected how much we read, what we watch and what we listen to. We know for certain that podcast listening has grown at a phenomenal rate.

In fact, the number of adult Australians who have listened to a podcast in the past week has increased by a massive 50% since last year’s survey. More than one in four of us has listened in the past week.

That’s according to The Infinite Dial Australia 2021 survey, the fifth year in which Edison Research has conducted its in-depth survey on Australians’ listening habits. 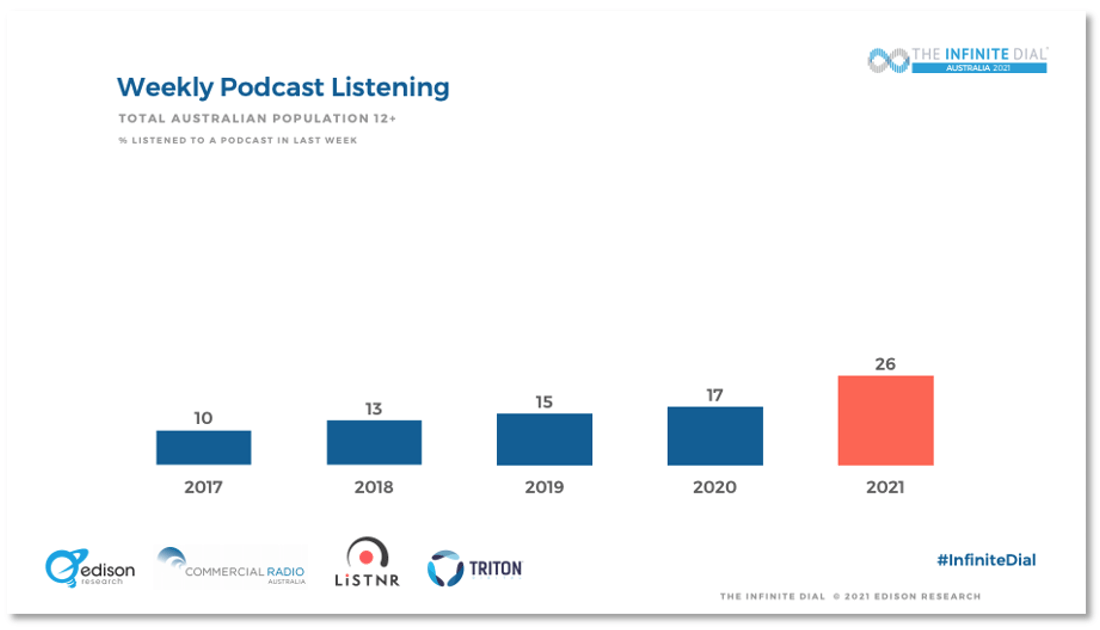 We asked Larry Rosin, President of Edison Research, his thoughts on the dramatic increase in Australians’ podcast listening habits. He said, typically Australians are two or three years behind their American counterparts when it comes to digital audio and digital development, but now it’s closer to 18 months, 12 months or even six months in some areas.

One reason could be, he says, is that there are more targeted podcasts produced by Australians: “As more bespoke Australian content is created, and not just catch-up radio, but podcasts that are specifically made as podcasts, but by and for Australians, that I think that will help close the gap.”

The number of Australian households which own a smart speaker has also increased by 50% since last year. That growth seems to make sense: if people are home more often, investing in smart speakers is not unexpected.

Edison Research indicates that those smart-speaker owners are increasingly looking to buy more than just one. “There’s also a lot of evidence that people who have one maybe in the kitchen got a second one for the bedroom or vice versa, or a third one in some cases, or even more,” Rosin says.

The most popular smart speakers in Australia are made by Google, Amazon, and Apple. But podcast listening is not as easy to consume as live radio or music. Larry suggests that it’s hard sometimes to find the exact podcast that you wanted to listen to. “They all default to the most recent episodes. And not everyone wants to listen to the most recent episode. Nor does anyone want to go to the effort of casting something off their phone to the smart speaker.”

Nonetheless, he says it is becoming easier to consume podcasts on smart speakers: “All three of the big companies, Google, Apple, and Amazon, are working to make podcasting an easier experience on the smart speaker.” 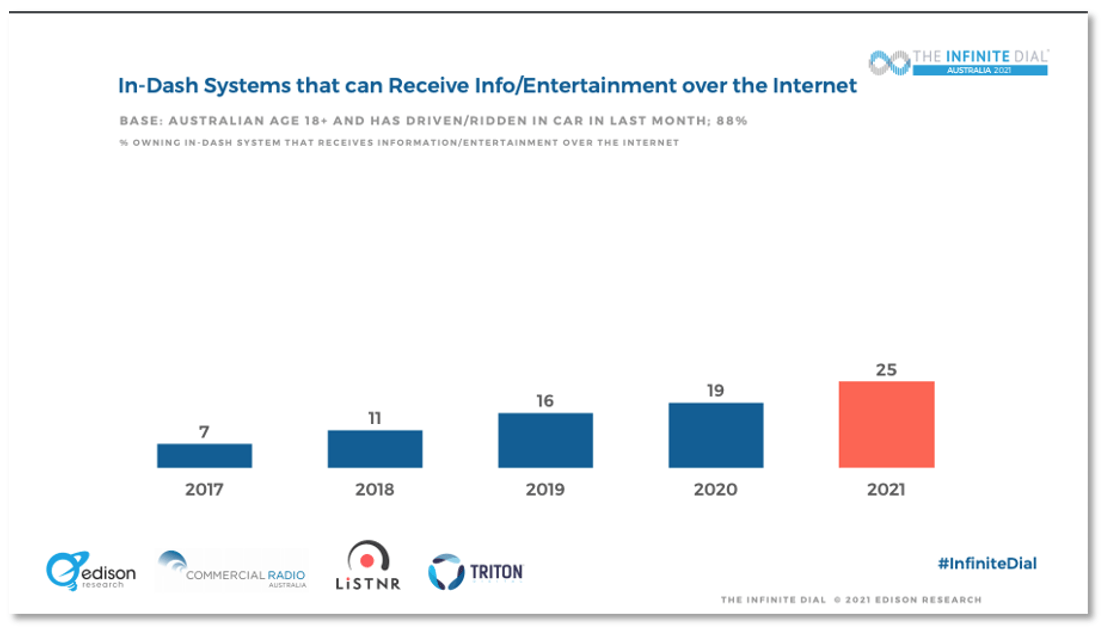 According to this year’s Infinite Dial Australia, 25% of Australian drivers have an in-dash system that can receive the internet. That means it’s easier to listen to digital audio in your vehicle than ever before. We know that today 30% of drivers have listened to a podcast in the last month, more than double (14%) the same time last year.

Car entertainment systems are part of the reason for the increase, says the Edison Research President. “But, also,” he insists, “there’s just a lot of evidence that once people sort of get into podcasts, they fill up more of their available time with them.”

He says people will start listening to an episode in the home, for example, and then continue the rest of the episode in the car. Also, as international travel has been near to impossible because of COVID, we’re taking to the roads to travel domestically.

Larry reckons it’s resulted in people preparing for their trip with a selection of podcasts.

“When you’re loading up for a six-hour, 10-hour, 14-hour drive, or something like that, the days of frantically tuning to try to find a new radio station, it seems a little outdated when you can load podcasts or a bunch of podcasts in, and you’re not going to drive out of the signal range of a good podcast. You’re listening to it straight off your phone.”

The future of podcast listening

With such a huge uptake in podcast consumption these last 12 months, have we hit peak podcasting? Well, no, reckons Larry Rosin. “It’s still in that very exciting sort of early development period. There’s no doubt it will hit its teenage years, and then maybe it’s early adult years and more mature time, but it’s not there yet. It’s still in that rapid development mode.”

We won’t argue with that.

Larry Rosin is speaking with Nick Schildberger and Nicole Goodman on next week’s episode of Podcasting Essentials.