Podcasting’s next frontier. The car.

Advancements in in-car entertainment systems have lead to increased consumption of audio content, while in the car.  Great news for brands looking to involve themselves in podcasting!

In May this year, Edison Research released The Infinite Dial 2020 Australia, an annual survey measuring the media behaviour of Australians, which shows that in-car podcast listening continues to grow.

In a recent episode of Podcasting Essentials, SoundCartel’s Nick Schildberger and Nicole Goodman spoke with Larry Rosin, President of Edison Research, to take listeners through the numbers.

The state of radio

One of the biggest takeaways has been our listening habits in-car. Traditional radio is still very important, but it’s becoming easier to listen to on-demand audio via streaming devices like Spotify and Apple CarPlay. Compared to the United States, Larry says radio listening is stronger in Australia:

“Unlike plenty of other countries, and certainly I would say here in the United States, radio in Australia remains a key rung on the entertainment ladder,” Larry insists.

“The radio stations there [in Australia] tend to be extremely well-resourced. You are still churning out and creating new radio stars, something that’s exceptionally rare here in the United States, where there’s just not the talent development and this orientation towards star performers and things of that nature.

Your stations do a lot of marketing and advertising, and I think it’s just more vital and has more urgency tied to it. I think people listen to radio because it’s good, and I think they listen more in Australia than they do in the United States for that reason.” 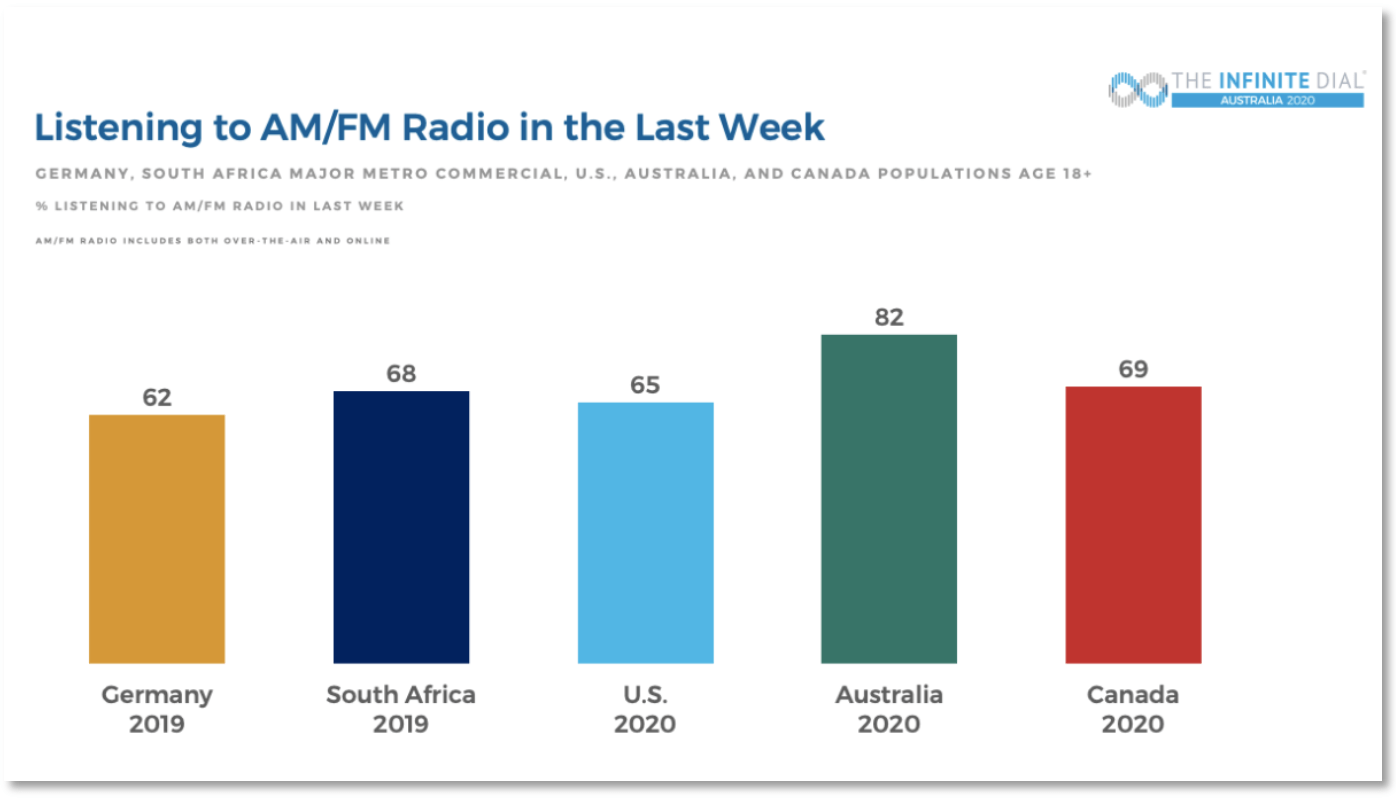 It’s perhaps because of better resourced and higher quality radio in Australia that podcasting hasn’t quite hit the listener numbers in Australia as in the United States. 25% of Australians listen to podcasts each month, compared with 37% in the U.S. Even though more Aussies (87%) are aware of the term podcasting than Americans (75%).

Larry has a theory as to why this might be so.

“Your broadcasters talk about podcasting a lot,” he says. “They started talking about it sooner than broadcasters in the United States did. I think you’ve pushed the term, but to date, there hasn’t been enough incentive for people to check out podcasting. That’s the best theory we have as to why the awareness of the term is higher, but the usage of the product so far has been lower.”

But, Larry is bullish about where podcasting is heading in Australia.

The car has always been a place of audio consumption. It makes sense, doesn’t it? How else are you going to be informed and entertained while your hands are firmly on the steering wheel? 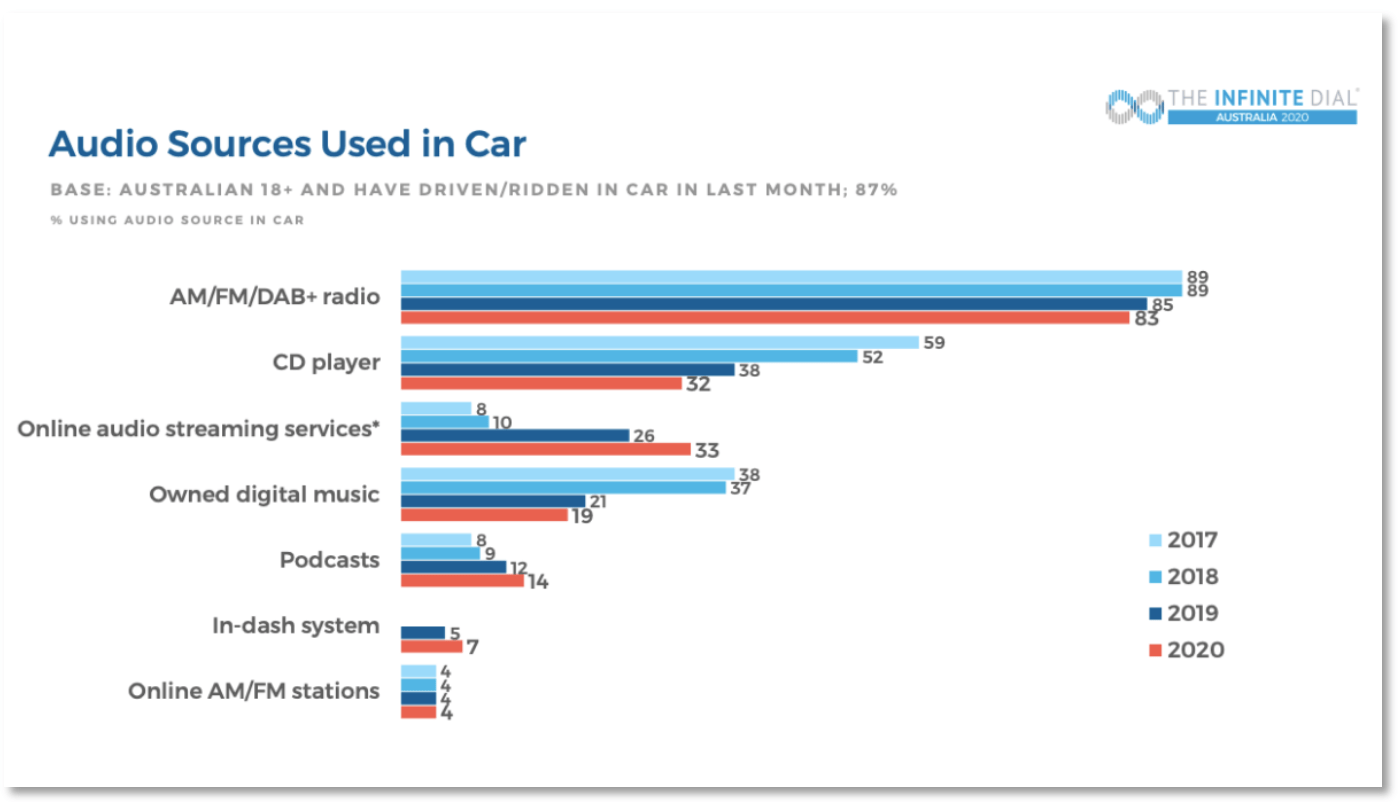 And that’s where we’re seeing early signs of massive disruption in our listening habits. Would you believe that just two years ago the majority of drivers had put a CD in the car player at least once a month?

Now, less than a third of us do. Online streaming services and podcast listening have increased dramatically since then.

Interestingly, today twice as many Americans listen to podcasts in the car. Australia tends to be a couple of years behind our American counterparts when it comes to media consumption. Larry reckons Australians will follow suit soon. 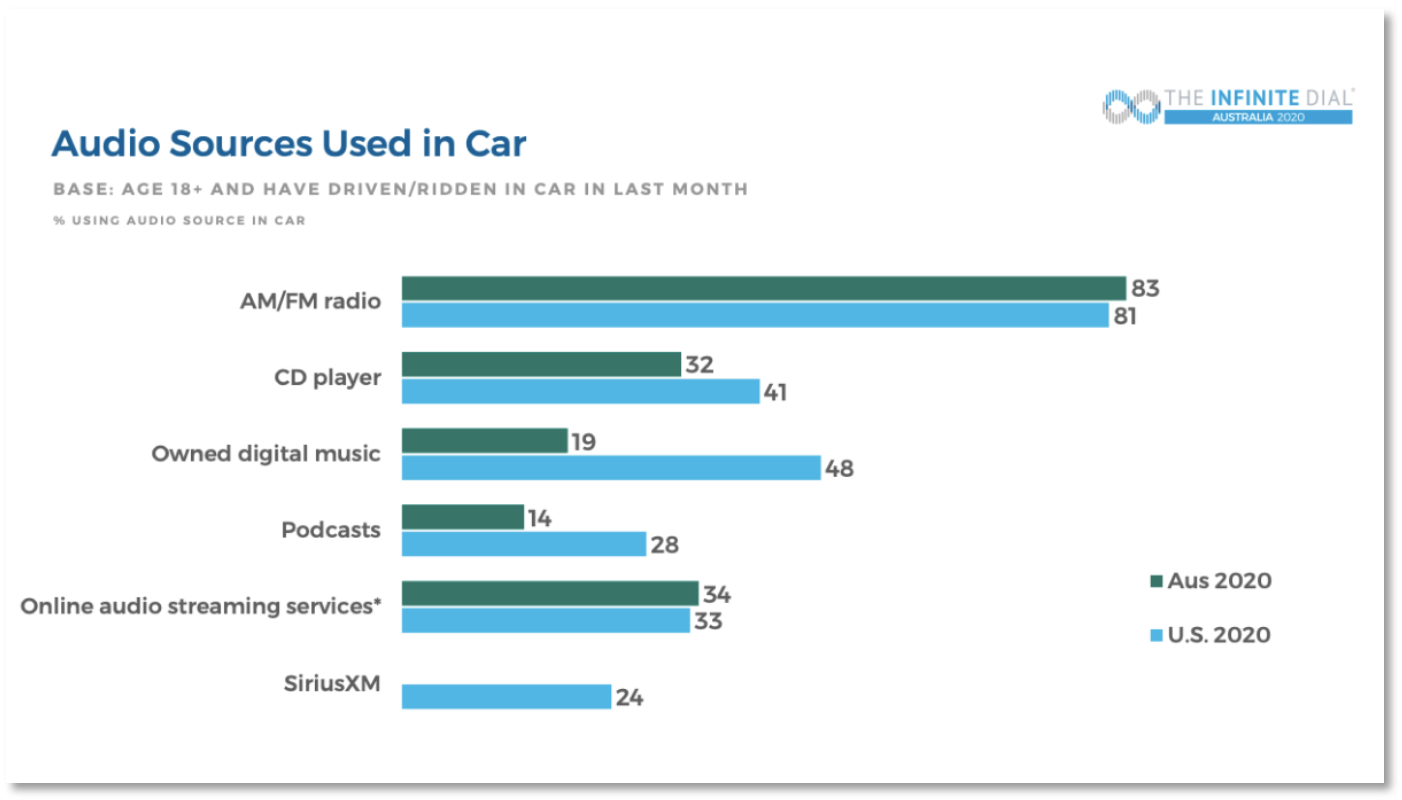 “I think the only reason your numbers lag the American numbers, which are about two years behind, is they [podcasts] were introduced here much earlier, and Apple has pushed incredibly hard here in the United States.

“The price points are very, very low, and the technology keeps getting better and better. I think it’s an extremely safe bet that your numbers may continue to lag the numbers in the United States, but they will continue to track along, and in as much as they continue to grow in the US, I think they’ll grow in Australia as well. With regard to the opportunities, they’re really endless.”

Larry says technology has been, and continues to be a barrier for many car owners. “It’s still for most people in most cases, not a terribly seamless experience to listen to a podcast in the car. If you don’t want to stream it, which many people would not, you have to remember when you’re in Wi-Fi, to download the podcast,” he says.

“As it becomes more seamless, as things like Android Auto and Apple CarPlay proliferate, I think you’ll see those numbers go up. But again, only 5% or so of the car stock typically turns over every year. It’s going to be a slow, incremental story.”

But, as American researcher and scientist Roy Amara famously said, “we tend to overestimate the effect of a technology in the short run and underestimate the effect in the long run.” We’re still in the early days of on-demand audio consumption – watch out for podcasting’s dominance in the years ahead!

Listen to the full Podcasting Essentials episode with Larry Rosin.

Subscribe FREE to Podcasting Essentials on your favourite podcast app, for more podcasting news and information for brands.

While you’re at it, you can also subscribe to SoundCartel’s daily podcast, Business Essentials Daily, for bite-sized business news, delivered 6am week-days, FREE to your favourite podcast app.