The subheading to this blog could be recycled for another 10 years! Podcasting continues to grow, whereas the same can’t be said for the consumption of social media (down 4% since last year) or audiobooks (plateaued).

For the first time ever, more people listen to podcasts than those who use Twitter.

We know how engaging podcasting is; and, as the quality improves and becomes more professional, more and more people are discovering this nascent medium.

In this survey podcast-specific survey, 2000 people (13 years old and over) were interviewed in early 2018 to provide a snapshot of Americans’ podcast consumption habits.

64% of the population is familiar with the term ‘podcasting’; up from 49% in 2015. Any wonder, with the number of new podcasts presented and created by thought leaders, celebrities, traditional media and commercial organisations, that awareness has grown significantly in 3 years. 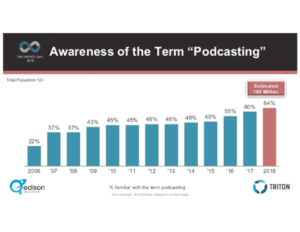 44% have ever listened to a podcast. This is equal or more than those who have ever consumed an audiobook.

Those who listen to a podcast average 7 podcasts in the last week.

Interestingly, smartphones are increasingly becoming a choice of audio entertainment. It’s obvious smartphones have a powerful edge over other devices for podcast consumption. 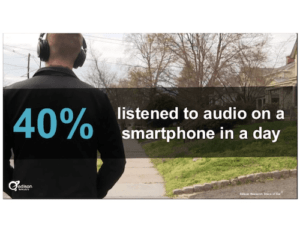 The places in which podcast listening is done most often, are:

Only 19% of listeners ever increase the speed of their podcasts to listen to them faster.