What’s on TV? Who cares anymore?

Kids are saying goodbye to TV and radio. What does that mean for you and your brand?

If you’re a parent like me, it’s hard not to notice how different your kids’ routines are compared with yours when you were young.

I remember as a kid watching Cartoon Connection on Channel 7 before school, that’s if Mum didn’t have the station switched to Channel 9’s Today show.

After school, I tuned into Ridgey Didge on 10; my high school years included Degrassi Junior High on Channel 2. As a family we watched the news, A Current Affair, A Country Practice and of course Hey, Hey It’s Saturday.

How different is it today? Well, the only shows my 11-year-old daughter watches on the big screen are Japanese anime on Netflix.

She doesn’t have a clue what’s on the main channels, nor does she care. And nor do any of her friends, who she hangs out with on Roblox.

In fact, in recent years, there’s been a rapid shift for all of us. The US Media Consumption Report, for instance, shows how quickly people are moving away from live TV and embracing streaming. 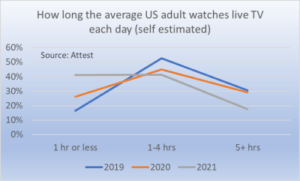 Yes, indeed, our habits are changing.

Does anyone still listen to the radio anymore? In the car, I certainly do. The local FM station is always the first to come on. I’ll switch to talk-back later in the day when I’m picking my daughter up from school.

But, there is a massive gap between Baby Boomers and Millennials and Gen Z (born between 1997-2012).

According to research by Morgan Stanley, Americans over 65 years old listen mostly (57%) to audio on radio, whereas young adults (18-29-year-olds) spend just 14% of their time listening to broadcast radio. 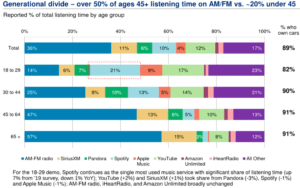 They sure are! They’re listening to on-demand audio services like Spotify, Apple Music, Pandora, and even YouTube Music.

In fact, according to Edison Research 47% of Americans subscribe to an audio service, a number that’s doubled in six years.

Podcasting is booming amongst the young

Podcasts, too, are being consumed overwhelmingly by younger Australians. According to the ABC, 72% of all podcast consumption is done by people aged between 18-44 years old. Only 8% of total consumption is from 65 years of age or older.

And podcasting’s had a boom during Covid – it’s the fastest growing medium in the past two years. In Australia, 37% of the adult population listen to podcasts each month. That’s a 50% increase from a year earlier.

What does this all mean for business?

Well, before the advent of the internet and mobile technology, the most effective way to connect with large audiences was through advertising on TV or radio or in newspapers and magazines. And those advertising spots cost a princely sum.

These days, younger people have a greater ability to search for information and entertainment that is more relevant to them. And increasingly they are consuming media from their back pocket: their mobile phone.

The opportunity for business is that on-demand media consumption allows them to create their own content to be consumed by their target market, whenever and wherever they want.

Remember, people are actively seeking out content to listen to on their own devices. If you can produce something that is unique and engaging, you can target a potentially large market without the odium and cost of advertising.

If you’re a brand and thinking about producing your own podcast, let us help you. Please call us on +613 982 8333 or drop us an email below.